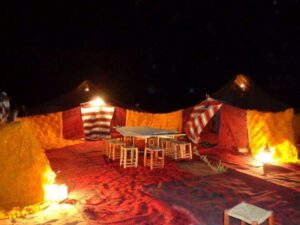 The Amazigh (meaning “free” or “noble”) people, a group of diverse tribes that still inhabit much of Morocco. Are the country’s first inhabitants. The Amazigh are said to have occupied this region from before 10,000BC. In the Atlas, cave paintings reaching back to 12,000 BC have been discovered. They were the first people in this harsh region to domesticate livestock and practice substance agriculture (around 5000 BC), though they frequently traveled into the mountains during the hot summer months and escaped to the valleys during the cool winter months when the mountains were uninhabitable. Cave dwellings were prevalent at the time and are still found in some areas today.

From Egypt to Morocco, an estimated 25-30 million people of diverse Amazigh tribes live in North Africa. These people have nothing in common with one another in terms of origin, history, or even language. Instead, they are linked by a name coined by the Romans and Greeks during their battles for control of North Africa. They called themselves “Berbers,” a phrase derived from the Latin barbarus, which means “barbarian.”

The moniker lasted over the ages, and names like « Berber Palace » and « Souk Berber » are now commonplace in the region and throughout Morocco.

Of course, the term “berber” isn’t the most accurate or politically right way to characterize these people. It is, nevertheless, frequently used, and analogies can easily be drawn with Native Americans of diverse indigenous tribes of North America who formerly despised the title « Indian » but today take pleasure in the history, tradition, and suffering. They are claiming possession of Indian in the same way that the Moroccan Amazigh claim ownership of Berber.

Amazighs are a proud people. When you don’t ask them whether they are Berber, but rather if they are Amazigh, you can see their pride.