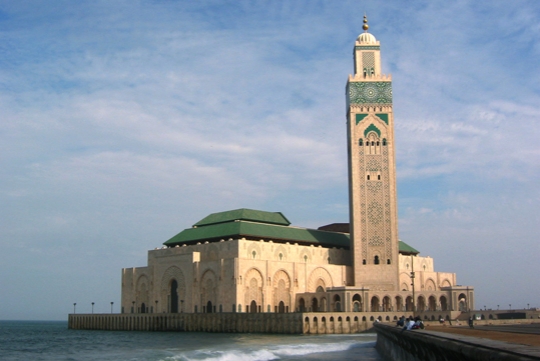 Day 1: Marrakech
Arrival at the International Airport of Marrakech. Your representative will receive you and transport you to your hotel.

Day 2: Marrakech.
After breakfast, there is so much to see and do on your first day of exploration that time will fly by. Marrakech, founded in the 11th century by the Almoravide dynasty, is home to numerous palaces and gardens, as well as: Marrakesh historical tour; The city has been declared as Morocco’s capital multiple times, which explains its plethora of historical structures, the highlights of which we explore in this half-day tour: The Koutoubia Mosque, the Saadien Tombs, the Bahia Palace…
After lunch, we visit the souks, which are a tangle of hundreds of stores, little alleys, and narrow passageways. With rows upon rows of spices, perfumed oils, magical medicines, leather items, and, of course, magnificent carpets and rugs, this is truly a feast for the senses. Spend the night in your hotel.

Day 3: Marrakech – Casablanca.
Transfer to Casablanca after breakfast. Check into your hotel first. Then be ready for a tour of the medina (old quarters), the famed central market, the Hassan II Mosque (external view), the residential neighborhoods, and the magnificent ” corniche ” shoreline overlooking the Atlantic Ocean in the afternoon. In the motel for the night.

Day 4: Casablanca Rabat – Meknes – Fes.
After breakfast, travel to Rabat, Morocco’s capital, to see the Oudaya Gardens Kasbah, the Mohammed V Mausoleum, and the tour Hassan Tower, followed by the ramparts and the Royal Palace. Depart for Meknes, Leter. Meknes city trip to see the medina and Bab El Mansour, one of Morocco’s most stunning city gates.
Take your time for lunch. Continue to Fes after that. In your motel, spend the night.

Day 5: Fes.
After breakfast, travel to Fes, the kingdom’s spiritual capital and the oldest of the imperial cities, which dates back to the ninth century. Fes is still a lovely medieval city to visit. A full day to take in the sights and sounds of the city: souks brimming with artisans, renowned tanneries, and the Karaouyine Mosque and university.
Your hotel will be your home for the night.

Day 6: Fes – Erfoud – Merzouga.
After an early breakfast, we depart for Erfoud, about 400 kilometers from Fes, traveling through Midelt. Meanwhile, continue to Merzouga, one of the most stunning dunes sites, where you will be able to see the sunset above the sand dunes. Nomadic tent for dinner and overnight stay.

Day 7: Merzouga – Todra gorge- Rose  valley..
Early morning wake-up call to witness one of the most spectacular sunrises, then head for Rose Valley after breakfast. You’ll see towers of backed red clay along this trail of hundreds of kasbahs, which resemble eerily similar to medieval Europe’s defences and castles. These Kasbahs blend in seamlessly with their environment thanks to their imposing architectural style. The gorges of Todra and Dades are both visited. Continue to Rose Valley and stay in a riad in Tazawa for the night.

Day 8: Rose valley – Skoura – Ouarzazate – Marrakech.
Breakfast is served in your hotel. Leave Rose Valley and go west to Ouarzazate, a former French Foreign Legion stronghold and oasis. Spend the morning visiting the Ouarzazate region. Visit the UNESCO-restored Kasbah of Ait Ben Haddou and the Kasbah Taouirirt. Continue north across the Atlas Mountains to Marrakech, an ochre-hued walled city. Check in and spend the night at your Marrakech hotel.

Day 9: Marrakech
Breakfast is served in your hotel. Transfer to the airport in Marrakech for your departure flight.